“Ice is one of the most important ingredients in your bar,” declares veteran Cape Town bartender Kurt Schlechter about what is potentially one of the most overlooked too. Just look down at that the mini-berg in your glass nudging up against the shrub and eco-straw, slowly giving way to the inevitable. Nothing to it, right?

“A bar with a serious ice programme is serious about drinks,” Schlechter continues, adding that great ice makes great drinks. What he’s talking about is clear ice – slower melting, no bubbles and no cloudiness. The assumption is that if you care about ice, you care about the other stuff too. Schlechter says a serious cocktail bar should have a clear ice-block maker and Kold draft ice machine or similar.

“The clear ice block makes a Negroni or Old-Fashioned taste better in my opinion.”

For the occasional cocktail-maker, there are plenty of online how-to videos and articles using stuff as basic as a kettle, Tupperware and a cool-box. See the video at the end of this article.

"A bar with a serious ice programme is serious about drinks."

But as every wannabe Tom Cruise knows, the best part of any drink is its stories. And even ice has one, which goes back way before the 20-year trend in clear ice cocktails.

Up until the 17th century, frozen water was a privilege of only the very wealthy: think Romans, Persians and Egyptians. Measure that against a 2010 estimation of the number of freezers in South Africa alone, at around 3,5 million.

In days of yore, the rich could acquire and maintain ice without the help of machinery or chemicals. In many cases, ice was harvested from glaciers, icy lakes, and snowy mountains, and transported to be stored as needed.

Commercial refrigeration only arrived in the early 1800s, conceived by an American, which also led to the invention of the first ice-making machine in 1854. It was the application of ice in food transportation however that really propelled the concept, including in South Africa.

In fact, it was in Dock Road that’s also home to Schlechter’s “cocktail kitchen and Cape brandy” bar called Cause and Effect, that the story picks up on our shores. And it has to do with beef.

At the time, South Africa was heading for a boom. A massive diamond had just been discovered in the country. Fortune-seekers flooded into Cape Town, where 11-year-old David de Villiers Graaff had started working at a relative’s butchery.

Then, in 1882, news broke of the first commercially successful shipment of refrigerated meat delivered to London from Australia. Then just a young man, David realised the potential. In Dock Road he set up cold storage for passing ships, but also southern Africa’s rail network. The arrival of electricity at this time supercharged his efforts.

The downtown building, which today houses various enterprises including a Col’cacchio restaurant, became the HQ of Imperial Cold Storage & Supply (ICS) and also one of the country’s largest and historic meat processing, storage, distribution and marketing companies.

Headquarters of ICS for most of the twentieth century, the old Dock Road premises, now a Provincial Heritage site, was a familiar landmark in Cape Town.

(Image and caption via: https://earthwormexpress.com/)

Its early years, however, saw the rise of another industry that would thrive alongside. This was a period of exceptional growth for Cape Town’s hotel industry. Quoting the Juta Directory of 1906, author Michael Walker says in his 2015 book The Old Hotels of Cape Town (1890-91) records reflect there were no less than 160 hotels, taverns, inns and bottle stores in the city at the time.

“Cape Town was the gateway to the wealth of Africa,” he wrote, and with the advances in refrigeration, demand was primed for that key ingredient of great cocktails: ice.

How to make a clear ice block

Cloudiness and bubbles are trapped as blocks freeze from the outside in. The trick is to get the blocks to freeze in one direction only, pushing the unwanted particles to the side where they can be shaved off. Some online sites advise using filtered water, boiling it and letting it cool before freezing.

One method is to use a small cooler box in a chest freezer. Fill the cooler to the desired level and place inside the freezer, leaving the cooler lid open. Cold air will chill the block from the top, forcing any cloudiness to the bottom. Monitor regularly until a few millimetres of water remain beneath the block. Pop the block out and cut into shapes with a bread knife. 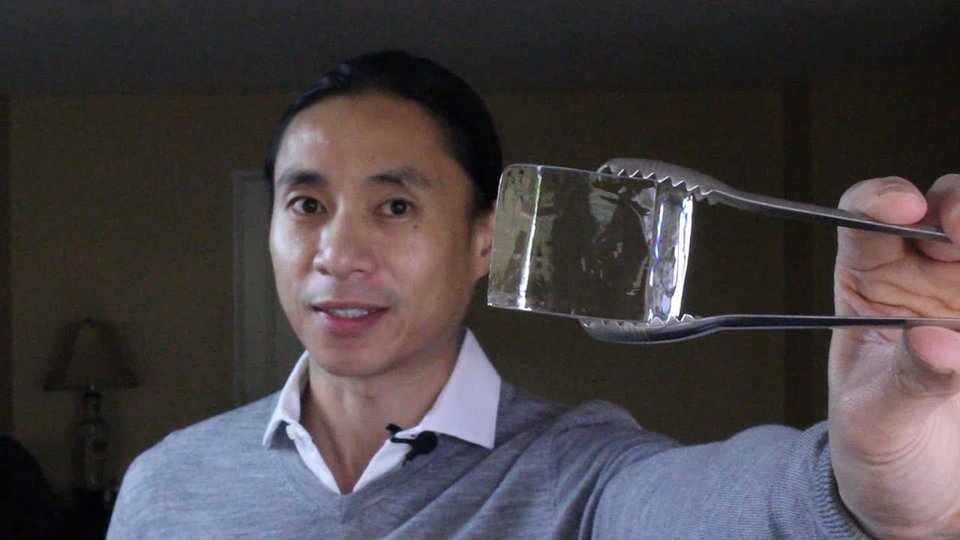